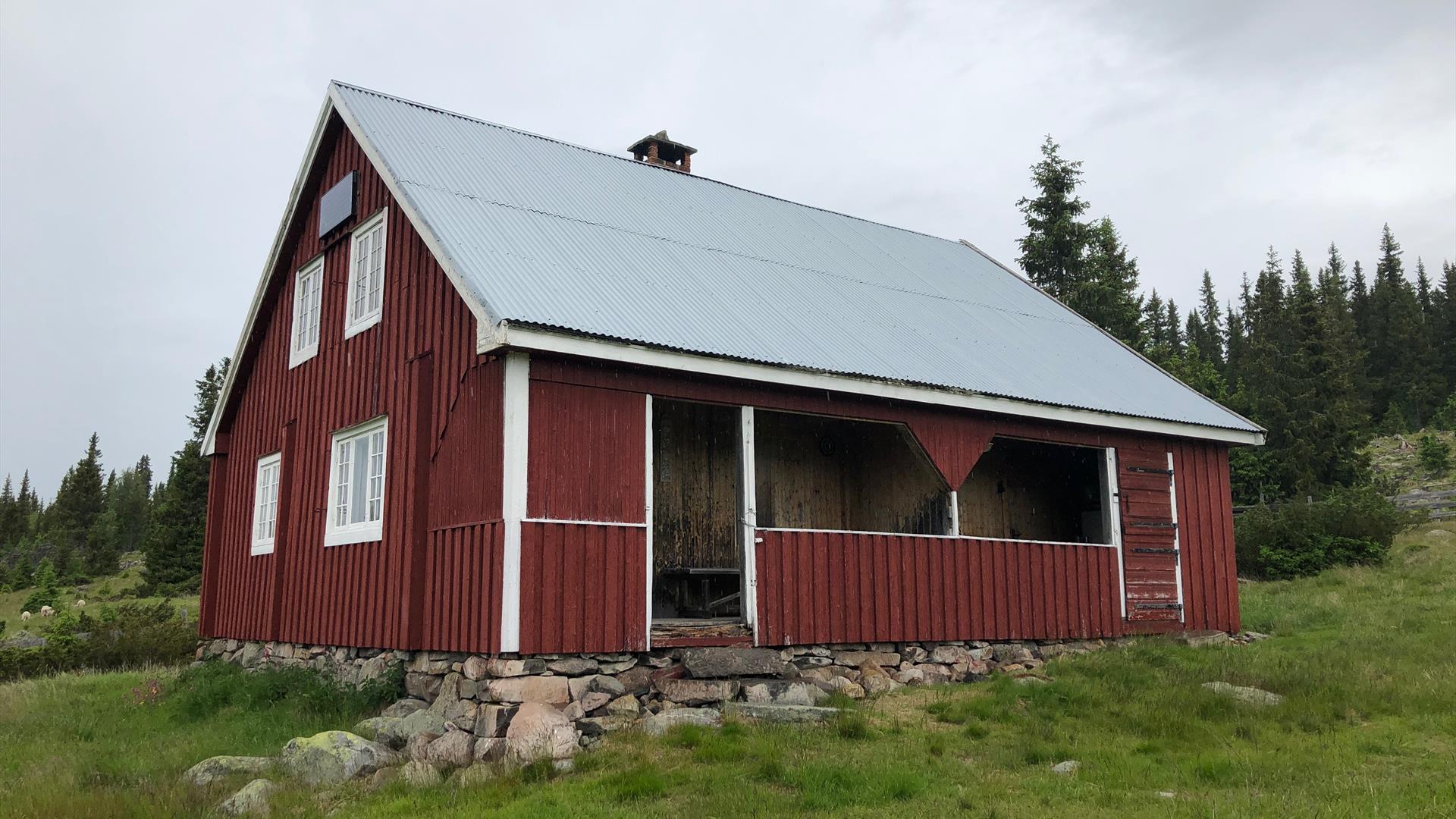 "Distance: Storåsen round-trip: approx. 30 km Storstilen round-trip: approx. 10 km Suitable for: Storåsen is best suited for cyclists used to handling relatively long distances as there are many climbs on the way back, particularly at Rosinbakkene. Storstilen is ideal for children and cyclists preferring shorter distances. The legend of Gjertrud and the wedding procession forms an integral part of the trip. With Storåsen as starting point, pedalling along Birkebeinervegen is a wonderful feeling. Glide through the pristine mountain scenery as the miles disappear behind you. The terrain starts out flat towards Kuåsen, Elgåsen, and Aksjøen. Continue for some time, and then roll down towards Rosinbakkene and Storstilen – a large summer dairy-farm area in the Ringsaker mountain. Stop for a drink, and then continue down to Øvre Åstbru. By the riverbank is an idyllic spot equipped with picnic tables. The kiosk at the junction offers ice cream and other treats as well as friendly advice for visiting cyclists. Information such as directions to Gammelskolla, located a couple of kilometres from the junction, can be very useful. Gammelskolla After an hour cycling at slow pace from Storåsen, you have reached one of the highlights of the day. Gammelskolla is a mountain farm in a sheltered location on the south-western slopes by the foot of Kotuva mountain, with Ringsaker’s highest peak, Tuva (1090 m a.s.l.) behind. The mountain farm area sits by the feeder river Skolla, with the county boundary between Hedmark and Oppland running across its pastures. Back in 1668 it was home to 15 mountain farms and was beaten in size only by Sjusjøen with its 39. Today, several hundred years later, the pastures are used for grazing only. It had a farm café in the 60s and 70s, and a farm shop selling milk, sour cream, and cheese in the 1980s. A new footbridge across Skolla provides easy access to the area and its picturesque farm buildings and cabins. If you cycle past the footbridge and continue straight ahead, you will find true a gem of a picnic area and swimming spot on the lower side of the road. Excellent facilities suitable for all age groups. Relax with a coffee, and enjoy the views of the beautiful mountain farm area on the other side. You will be in no rush to leave. Gjertrud and the wedding procession According to legend, there was once a dairy maid called Gjertrud at Gammelskolla who disappeared in the mountains. People searched day and night, but she was never found. Then one evening her sister Rønnaug, who was also a dairy maid, heard Gjertrud holler up in Kotolia: “I am fine, and now I am getting married! To see the wedding procession, you have to come to the mountain tonight!” Rønnaug did as Gjertrud told her, and from Kotuva she had a good view of the northern part of the valley. Up in the mountain, she could see both houses and people. Suddenly, a large wedding procession on horseback appeared and entered through a door in Kotoberget. Today this is called Kotokjekja (the Koto church), and where the procession appeared is called Gjertrudsfjellet (Gjertrud’s mountain). People saw this as an important wedding in the underworld, and the moral of the story is: Never pour hot water on the ground. There are many living down there... Geitbu Another mountain farm well worth a visit is Geitbu – a lovely detour on your way back. Turn off when you see the sign by the road, and follow the track up to the farm. On the left hand side is a large, red building. This is Biskoplien mountain farm, and was built in 1906 after the old farmhouse had been destroyed by fire. It is a tall building with a portico entrance. Traditional building methods This is a so-called double farmhouse, i.e. two farms sharing one building. The most common mountain farm building had two rooms and an entrance along the sidewall. From the mid-1800s, three rooms became more common to allow the dairymaid her own space when the farmers themselves were staying. There were also farms sharing a farmhouse, but each with their own barn, and Biskoplien is an example of this. Mountain dairy farms often comprised several buildings, each serving a specific purpose, and they were all practical and built to utilise the resources in the area. A separate room for dairy products called a “mjølkebu” was common. This was where the dairymaid made cheese and butter. The room had to be cold and dark, and should preferably be facing north. Some light was let in, but only through narrow gaps in the wall. Return to Storåsen After visiting Gammelskolla and Geitbu, it is time to return to Storåsen. There are several uphill sections from Øvre Åstbru towards Storstilen, and then there is the Rosinbakkene climb which is bound to get your heart rate going. Take your time, explore the surroundings, and enjoy the ride from beginning to end. For a shorter and less challenging trip, an excellent alternative is to drive to Storstilen and leave the car there. Source: Årbok 1984, Ringsaker Historielag Kommunedelplan for kulturminner og kulturmiljø, Ringsaker Kommune 2017 Text: Åse Kari Gravråk More about mountain-farm cycling adventures "